Laurène Legrand, Meriem Zoghlami and François Perrin from the Terraquée theatre company http://www.cieterraquee.com/la-compagnie/ in the outskirts of Paris have set up a project around the exhibition "Women of mathematics throughout Europe" with 12 years old school children of the Iqbal Masih school in Saint Denis, a suburb North of Paris:
http://masih-saintdenis.webcollege.fr/

The project started on February the 20th with the visit of the exhibition and ended up with the kick off of their own exhibition at the end of June. 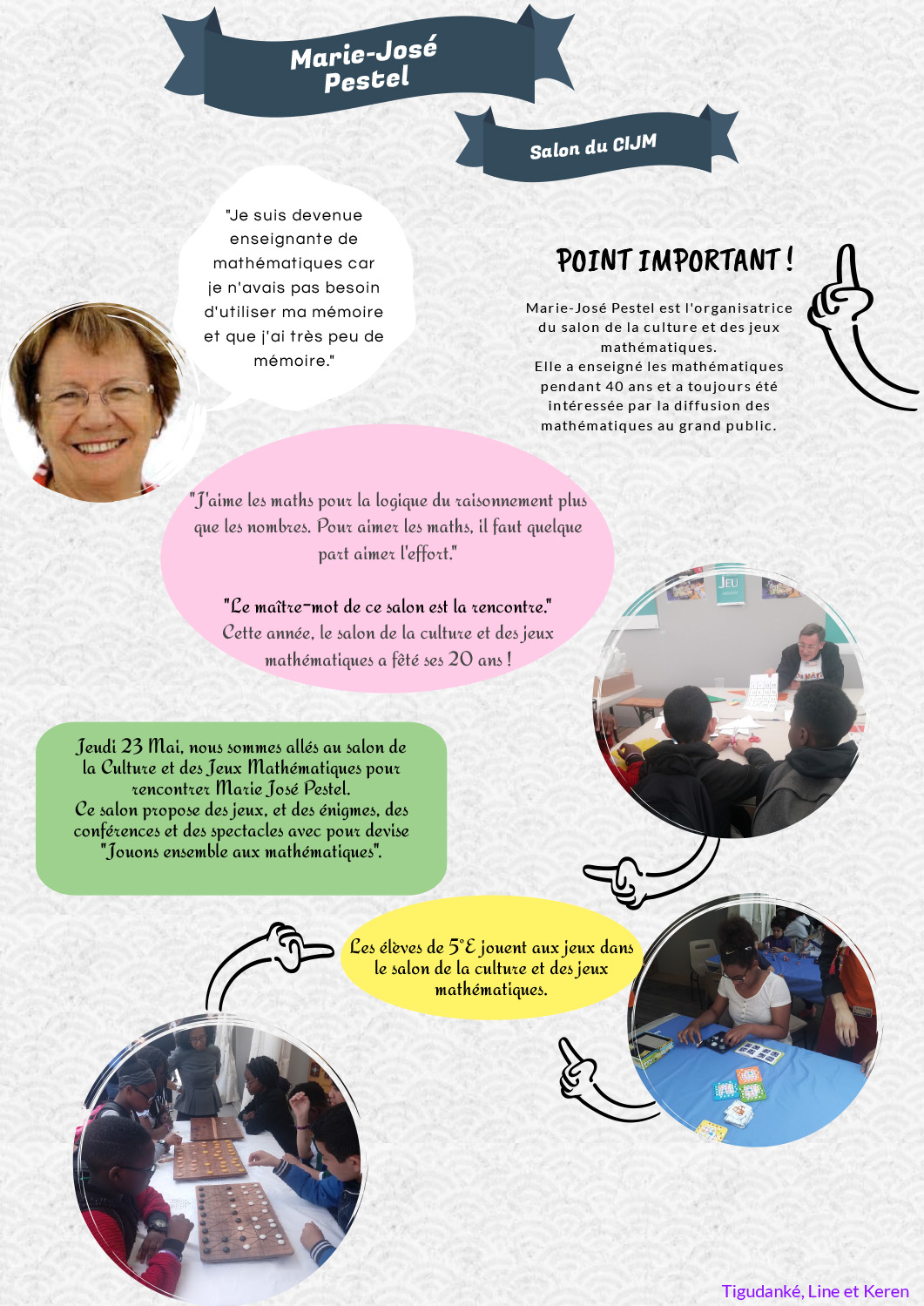 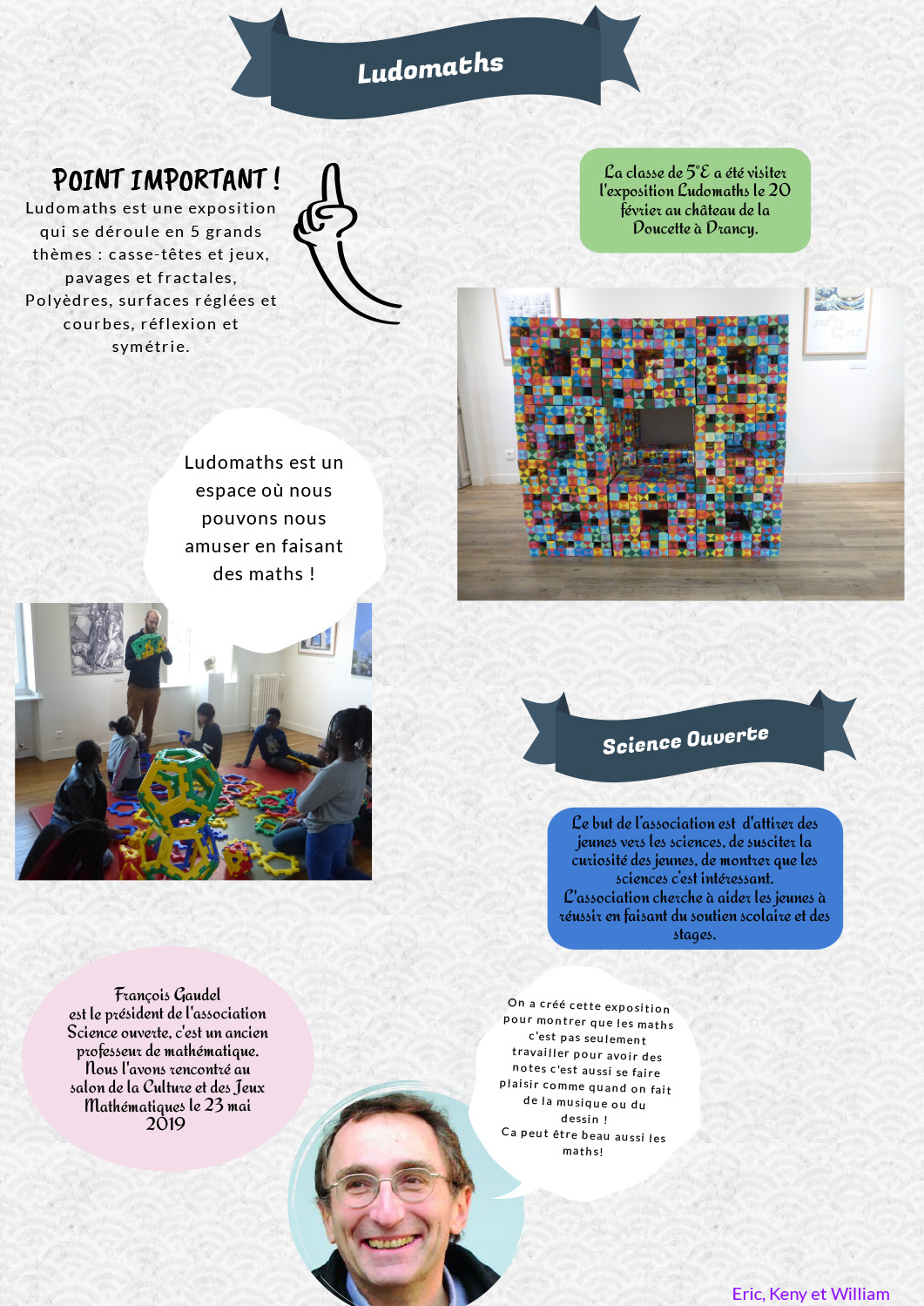 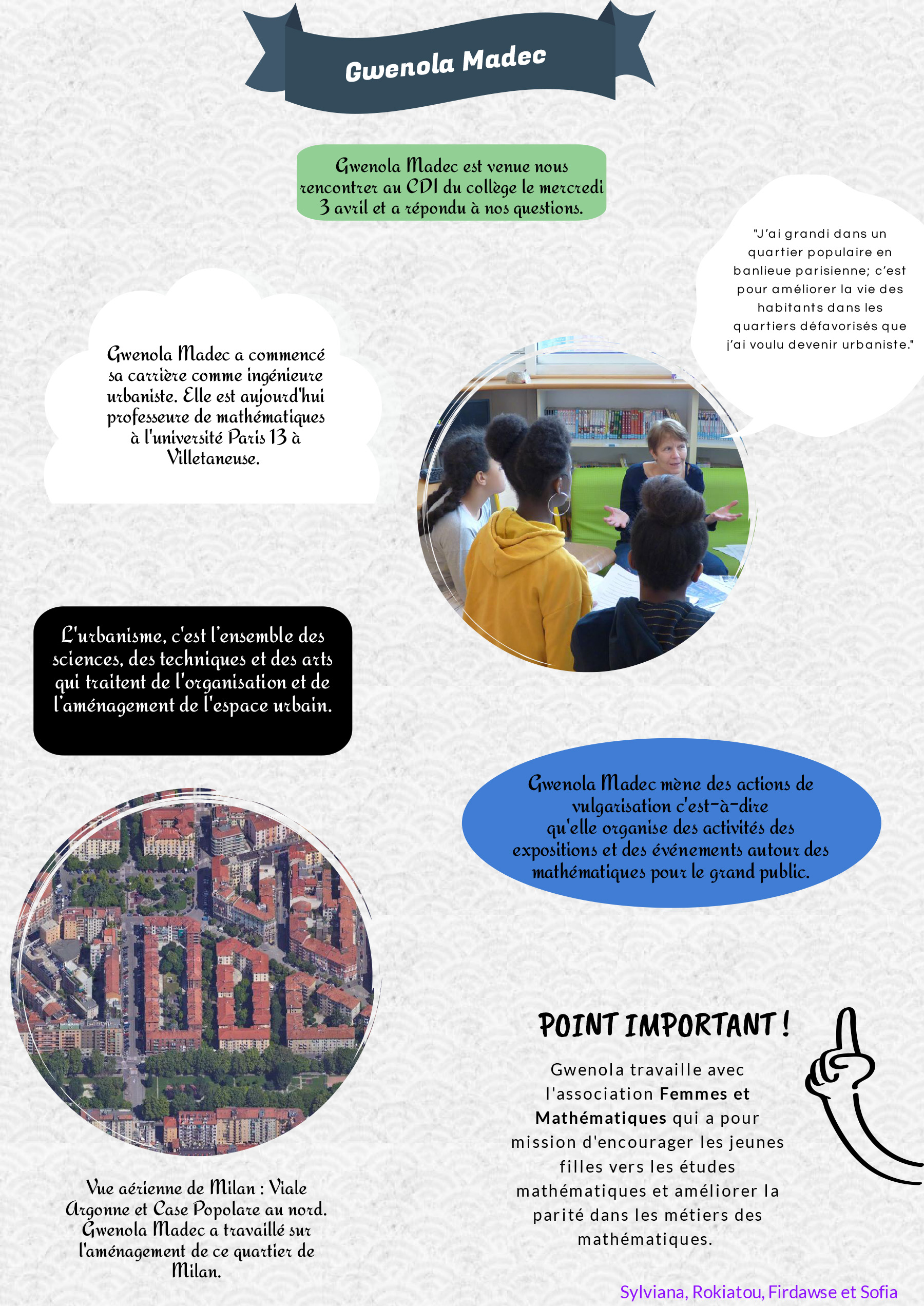 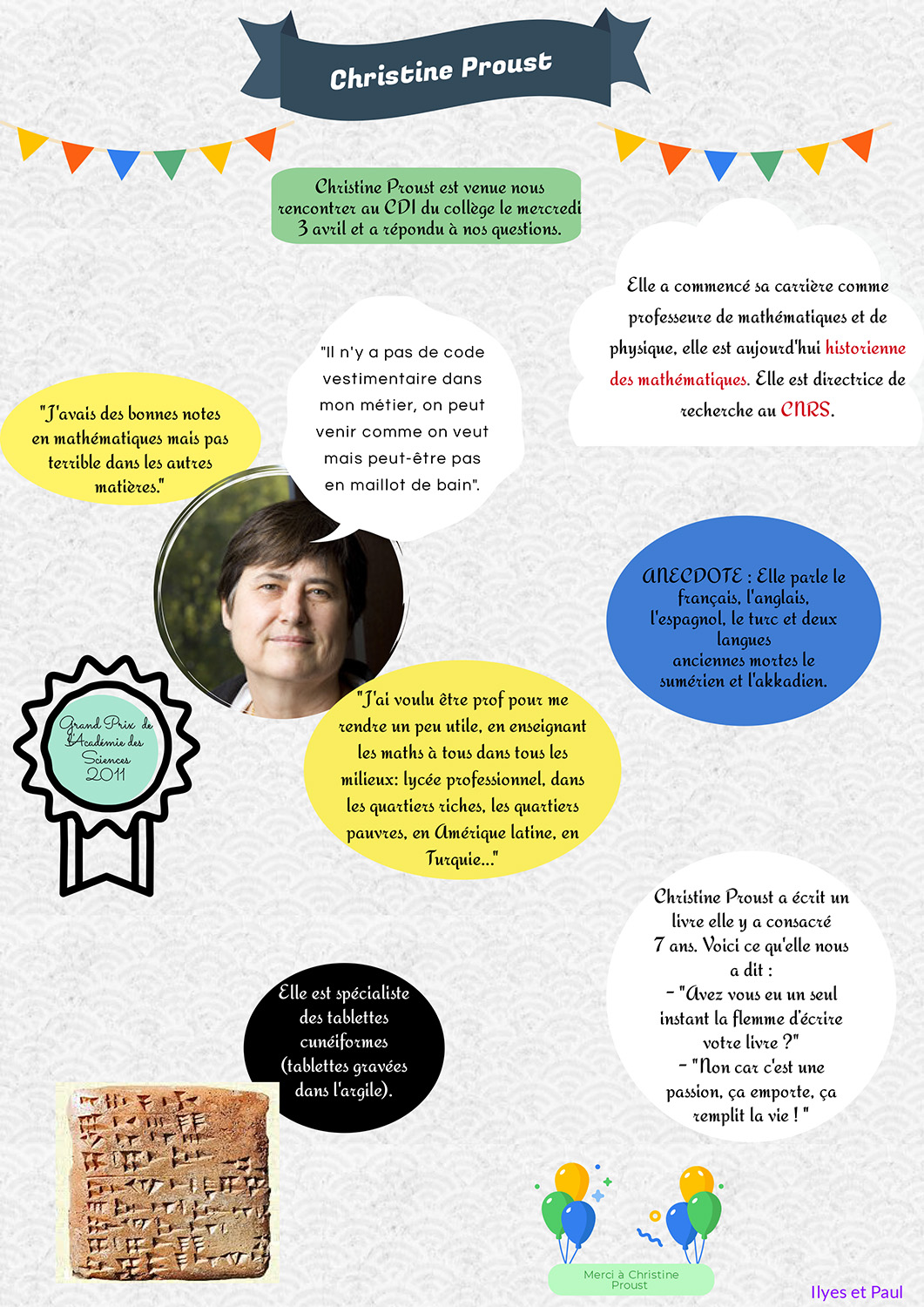 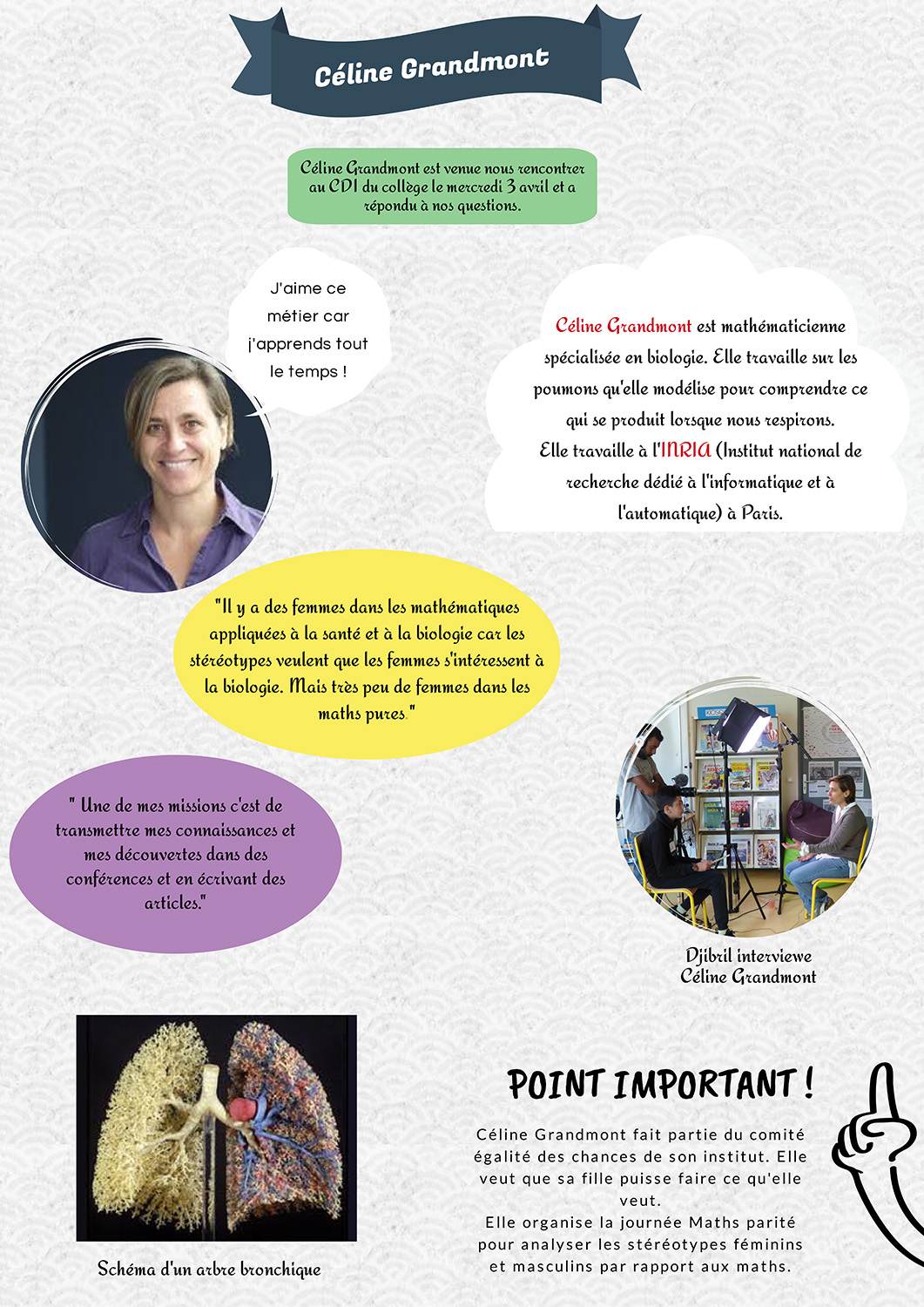 The following questions were asked by attendees, the mathematicians will (or have answered) as soon as possible.

ALANE: Do you think maths contribute to fight pollution?
FRANCES KIRWAN: Some mathematics is certainly used to help ways of fighting pollution, and I hope more of this will happen in the future. However sadly I cannot see the sort of maths which my research involves contributing in this way.
ALANE: You say that "you like to prove you are right", what is your reaction when you can't do it?
FRANCES KIRWAN: That is not quite what I meant. I like it when I can be sure that something is right because it has been proved (usually not by me, though using an argument which I can understand). Of course there are lots of things which might be right but which haven't (yet) been proved by anyone.
KEREN: What do you like about maths ?
FRANCES KIRWAN: As above, I like the fact that when something in maths has been proved to be correct then there cannot be any doubt or dispute about it.

ILYÈS: Is it easy to calculate with letters and geometric figures?
BARBARA NELLI: Letters are useful when you do not know “quantities”. Suppose you do not
know how many doughnuts you can buy with 10 euros. Then you call the numbers of doughnuts  X (a letter). Once you know that 1 doughnut cost 2 euros you may write 2X=10 and you quickly discover that X=5, that is you can buy 5 doughnuts! :-)
Figures are wonderful. In fact I work in a mathematical area called geometry, where  pictures are very important tools. I always do a picture to get an idea of how things can go and then I try to “prove” the picture. A picture is like an experiment!
ILYÈS: Is it boring to always do math?
BARBARA NELLI: Not at all, maths is a very creative  discipline. When doing maths, you are  always creating something new or learning something new.
ILYÈS: What maths stand for according to you?
BARBARA NELLI: This is a very difficult question. I would say: The art of creating models to try to understand the world around us and to figure out its evolution.
PAUL: Do you sometimes make mistakes in your calculations?
BARBARA NELLI: I make a lot of mistakes and this is very good. The key point is to recognize the mistakes  yourself, by revising your computation or by understanding that the result is strange, and then correcting it. As always in life, one should learn from one’s own mistakes.
PAUL: Are you a maths genius?
BARBARA NELLI: I do not feel a maths genius at all. I want to add that most of the people doing research in mathematics have a real talent for mathematics, but this does not mean they are geniuses. Talent is something useful in everything you do and in mathematics it is necessary.  But doing mathematics requires a lot of work and tenacity. Do not give up in face of difficulties and just go ahead.

LINE: What is the role of a mathematician?
KATARZYNA (KASIA) REJZNER: For me the role of a mathematician is to look for patterns in nature and to try to understand numbers, structures and ideas that people use to describe the world around them. By getting better understanding of these things, a mathematician discovers new structures and new relationships between them. This is a bit like solving puzzles, but you don't know if a solution exists or maybe there are multiple solutions to the same puzzle.
LINE: Do you really create equations?
KATARZYNA (KASIA) REJZNER: I do, but I want to think of it as discovering them, rather then creating them. My goal is to find equations that describe the real world and that are as simple as possible. Sometimes the beauty of things we find is so striking that we believe that we merely discover them and it is the nature itself that created them.
TIGUDANKE: How to be sure we want to become a mathematician?
KATARZYNA (KASIA) REJZNER: The best way to be sure is to try it, or at least get a taster of what working mathematicians do. For example, if you like solving puzzles, asking the question "why?" and getting to the bottom of things, you might want to give it a go. I wasn't sure about the career in mathematics either. I was interested in many things in my life and in fact I started off as a physicists. Then, I realized that the questions I ask and the way I think about problems were driving me towards mathematics, so I went with the flow.
TIGUDANKE: Did you invent a theory?
KATARZYNA (KASIA) REJZNER: Maybe not a whole theory by myself, but certainly significant parts of one. I'm a mathematical physicist, so my job is to discover/create mathematics that can be used by physicists. This is a big project and I wouldn't be able to make progress without many people, who came before me and did their part and also those who are collaborating with me right now.

SYLVYANA: Why did you do this job in particular?
KATRIN: The decision came step by step. At every step, when I noticed that I enjoyed doing what I was doing, I tried to find a way to continue doing it.
For example, while I was completing my high school degree, I knew that I enjoyed to learn new and challenging things, and I knew that I enjoyed thinking about mathematical problems, among many other things. The decision for mathematics was not easy, because it meant that I would be spending less time on everything else. But I did observe that I found mathematics easier than many of my class mates did, so it would have almost felt unfair not to use a gift that seemed to come nearly for free to me.
Though much more challenging, I enjoyed studying Mathematics at the University a lot, I also enjoyed teaching the younger students in tutorials, and presenting my own ideas in seminar talks. This made it easy to make the next few decisions, namely to try to obtain a PhD and to continue afterwards on a postdoctoral position. I found a permanent job as a lecturer in mathematics quite quickly after my PhD. The job came with a lot of new responsibilities, but since I kept enjoying the research and the teaching, and since I would be working in an excellent and very friendly mathematics environment, it was an easy decision to accept that job. This is why I chose to become a University teacher in Mathematics.
DJIBRIL: Is there a dress code for mathematicians?
KATRIN: There is certainly no dress code for mathematicians. I like it that if you asked me about a particular style of clothes, I believe that I could name someone among my colleagues who is regularly dressing in that style. For myself, when I teach or present a talk, I have the rule that I try to choose clothes that don't distract my audience from the contents of what I want to say. So I do think about what I wear. But I don't feel obliged to any particular choice.
DJIBRIL: Did you invent a theory?
KATRIN: Together with my coauthor Anne Taormina, I have developed a technique which we call “symmetry surfing”; as the name says, it allows us to surf through certain (mathematical) spaces and to pick up all the symmetries that we can find, along the way.
When we first came up with this idea, nobody believed in it, including ourselves. It looked a little to crazy to work. But by now, other groups have also found evidence that our technique works fine and that it is useful. The technique is now referred to officially under the name of “symmetry surfing”.
I wouldn't dare to call this a “theory”. But it is a novel technique.
KENY: Do you have easy techniques to learn maths more quickly?
KATRIN: I have several techniques that make it easier.
First, I always try to draw a geometric picture, because this helps me, in general, though I have noticed that these pictures sometimes only work for me. Next, I try to find an easy example and a counter-example, so that I can attach some numbers and calculations to concepts that may look very abstract. It also always helps me to try and explain to someone else as much as I have understood, or where and how I am puzzled.
But finally, the most difficult and most useful technique is patience. When we ask how quickly we have learned something, then we have to take into account that probably, along the way, we have learned a whole lot of other, unexpected things, as well. Being a little patient and not always asking for the quickest solution has allowed me to see some of the aspects of mathematics that I find prettiest.

ROKIATOU: Do you calculate everything you do, even when you cook ?
What are letters used for in mathematics ?
SADA: Tell us exactly what you work on ?
SILLY: Pourquoi toutes les mathématiciennes écrivent sur un tableau à craie et pas un tableau à véléda ?