The Female Faculty Network Twente,  took care of the local organisation
with Maya Daneva as the main coordinator.

It was opened  by the Rector Magnificus on Dies Natalis (56th birthday) of the university.

The exhibition was held in five different locations on campus,amongst which at  the library gallery, the mathematics faculty, and lobbies. 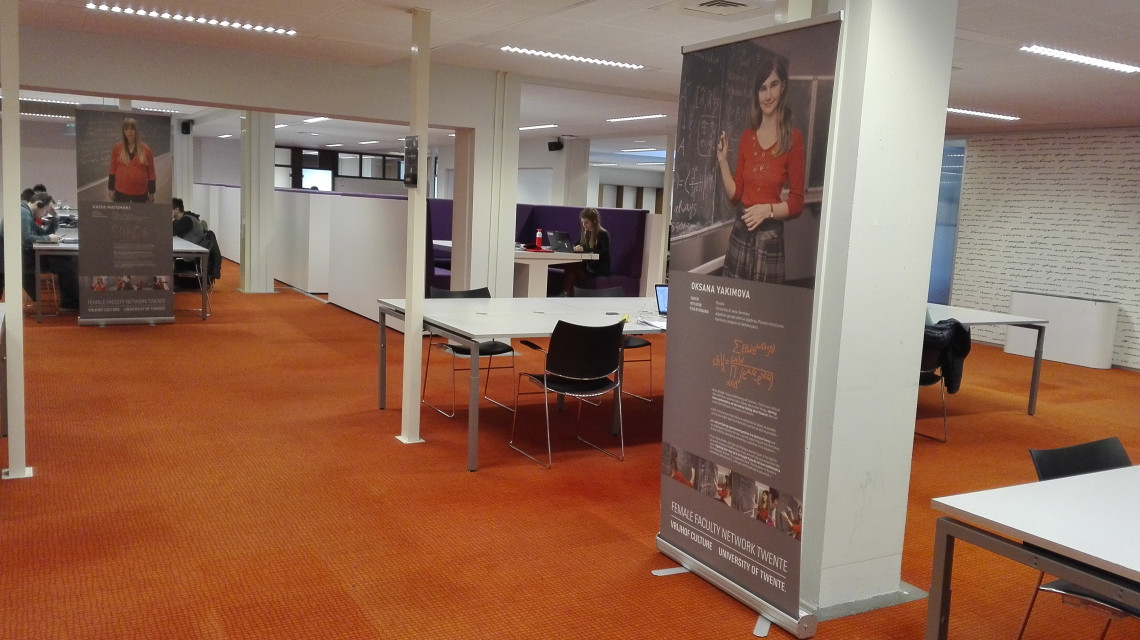 ‘I went to see the exhibit with my colleague and one thing we noticed is that many of the women come from Eastern Europe,’ remarks Nelly Litvak as we make our way to the UT library. ‘That might be because everyone works full time there, which means there are more people – men and women - in every field. Or it might be because people there are used to life being difficult, and so they work hard and not give up.’

Once we reach the second floor of Vrijhof, we scan the space and find the first part of the exhibition, which is scattered across both floors of the library. In total, the exhibit includes thirteen posters dedicated to female mathematicians from all over Europe. Each portrait is accompanied by excerpts of interviews, highlighting why the women decided to do math for a living.

‘It’s about what you love to do’

Isn’t it slightly odd that none of the posters mention any professional accomplishments? ‘Professional accomplishments will not be engraved on your tombstone,’ comments Litvak. ‘It’s about what you do every day, what you love to do. And the message of this exhibit says “Look at these women. They chose this path and they are happy.” It shows that mathematics is a career option. For me that message is gender independent, but unfortunately many people don’t think of it that way. We still associate technical fields mostly with men. The bias simply exists. Displaying only women here shouldn’t be necessary, but in reality it is.’

'It shows that mathematics is a career option.'

‘I like that the exhibit doesn’t emphasize titles or achievements – it shows different people at different positions, ages, countries,’ continues Litvak, coming back to the original question. ‘If you focus on the titles, it’s easy to think of these women as rare exceptions, it would be more difficult to relate to them. But there is nothing mysterious about women in mathematics. It’s just a profession like any other. It all starts with interest. If you are interested, you start studying, receive a lot of training, and become good at what you do. You don’t need any mysterious math gene.’

‘Look at that one,’ Nelly Litvak points to one of the posters in the back of the library. ‘She dressed well for the picture,’ she whispers, as we move to the ‘silent’ part of the study area. ‘We also discussed that with my colleague, that for a women it is important what she wears. It probably shouldn’t be, but it is, people do look at that. Hilary Clinton says she knows that people first look at what she wears and then listen to what she says. It is probably much more true in politics, but to some extend it is true in mathematics as well.’

‘It’s normal that you don’t get it’

‘There was one more that caught my interest,’ Litvak searches for a poster displaying Dušanka Perišic, a Serbian mathematician who was building her career during the war in her home country. We find the portrait on the ground floor. ‘Look at what she says “You don’t have to know everything”. That is really important to remember,’ points out Litvak. ‘Research shows that girls get discouraged much easier than boys if it comes to mathematics. It is normal in math that, at some point, you don’t get it, that you don’t understand the new concept. But if that happens, girls often hear “that’s okay, you can do other things” instead of “try again”. You shouldn’t give up, though. Math is something that human logic created and there is nothing in it that human logic can’t get.’